The operations of working class photographers, and in particular, the itinerant photographer, were largely ignored by the vocal and opinionated Victorian photographic establishment who lamented that they were “destitute of artistic taste”.1 To them, the only socially acceptable form of photography was that undertaken by “gentlemen of refinement and education” who were in search of a higher art form.2 The concept of photography as a means to make money was largely derided by The British Journal of Photography, who in 1867 suggested that it had “done quite as much to lower the status of photography in the public eye, as if they had systematically and knowingly set about degrading it for some sinister purposes of their own.”3

A correspondent to The Photographic News in 1864 wrote:

Swarms of other men, who have been brought up behind grocers’ and drapers’ counters, go out as operators, and as soon as they have learned the mechanical part of the business, borrow £50 or £100 from their uncle, and start in business for themselves…”

Unfortunately we have few first-hand accounts from these operators, possibly due to a lack of education on their part, and therefore most references to itinerant photographers are made by their monied critics. Hostility was also expressed by studio photographers whose businesses were threatened by these mobile interlopers. Audrey Linkman noted that “these established photographers were significantly opposed to, and indeed threatened by, the activities of the travelling operator, who would roll into town in horse-drawn wagons or pushing handcarts…these itinerants produced unwelcome competition, and could lead to a damaging diminution of profits.”4

Others photographers faced opposition enforced by local government, and London photographers in particular were felt to be a social scourge and so bylaws were introduced which attempted to remove such perceived blights from parks and heaths. There was clearly tension between photographers and the local municipalities that occasionally ended in court proceedings – which the photographic journals reported on with relish. Nevertheless, as the number of photographic studios increased in towns and competition grew fierce, some of these itinerant tintypists may have been forced to lower their prices, establish or join a studio, or to return to their previous occupations. 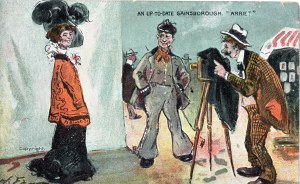